Are you kidding me?
The AP is reporting that Mexico's Navy and maritime authorities are using baited hooks to catch sharks after a fatal shark incident.

"It is not clear what species was involved in Monday's attack, but Navy Cdr. Arturo Bernal said that helicopter overflights had sighted two great white sharks nearby.
"We hope to catch any sharks that there are in the area," Bernal said, noting it was the only way to prevent further attacks. None have been caught so far.
"We may catch sharks which were not involved in the attack, but there is no way to know," Bernal said. "Fishermen are telling us that the sharks are very aggressive at the moment."
Environmentalists like Enrique Rodriguez Krebs, who heads the group SOS Bahia in the nearby resort of Zihuatanejo, opposes the hunt.
"There is going to be an indiscriminate slaughter of marine species with these hook lines," Rodriguez Krebs said.""

Remember - it's their world, we only swim in it. Killing a few sharks is a return to the "Jaws" mindset of the 70s.

Only one word defines it -- STUPID

If you really want to make the oceans safe forever -- just destroy all the wildlife there. Then it will be sanitized... and, oh yeah, that's right... it will be dead. I'm sure surfers would love to swim in polluted lifeless water.
Posted by Mako at 11:41 AM 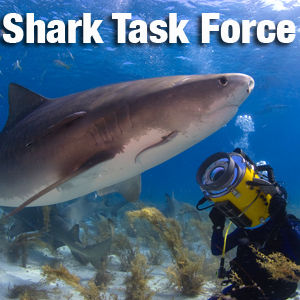